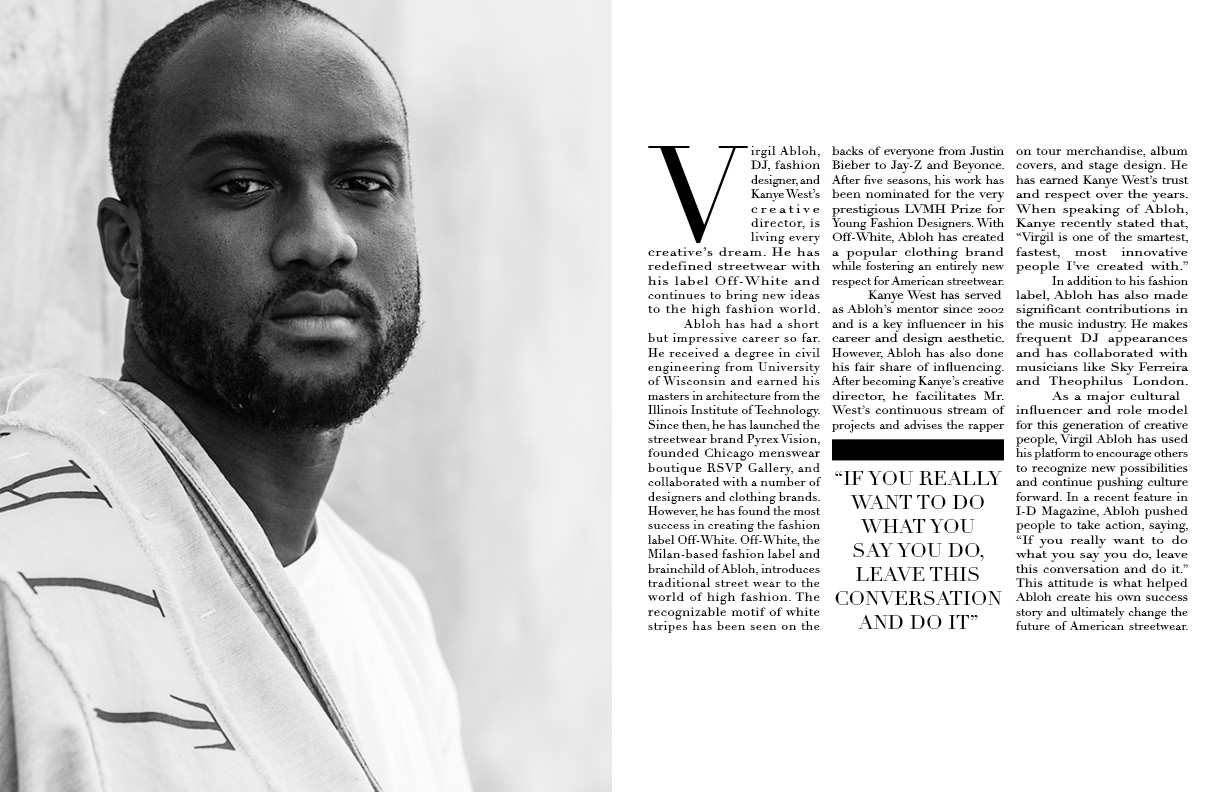 Virgil Abloh, DJ, fashion designer, and Kanye West’s creative director, is living every creative’s dream. He has redefined streetwear with his label Off-White and continues to bring new ideas to the high fashion world.

Abloh has had a short but impressive career so far. He received a degree in civil engineering from University of Wisconsin and earned his masters in architecture from the Illinois Institute of Technology. Since then, he has launched the streetwear brand Pyrex Vision, founded Chicago menswear boutique RSVP Gallery, and collaborated with a number of designers and clothing brands. However, he has found the most success in creating the fashion label Off-White. Off-White, the Milan-based fashion label and brainchild of Abloh, introduces traditional street wear to the world of high fashion. The recognizable motif of white stripes has been seen on the backs of everyone from Justin Bieber to Jay-Z and Beyonce. After five seasons, his work has been nominated for the very prestigious LVMH Prize for Young Fashion Designers. With Off-White, Abloh has created a popular clothing brand while fostering an entirely new respect for American streetwear.

Kanye West has served as Abloh’s mentor since 2002 and is a key influencer in his career and design aesthetic. However, Abloh has also done his fair share of influencing. After becoming Kanye’s creative director, he facilitates Mr. West’s continuous stream of projects and advises the rapper on tour merchandise, album covers, and stage design. He has earned Kanye West’s trust and respect over the years. When speaking of Abloh, Kanye recently stated that, “Virgil is one of the smartest, fastest, most innovative people I’ve created with.”

In addition to his fashion label, Abloh has also made significant contributions in the music industry. He makes frequent DJ appearances and has collaborated with musicians like Sky Ferreira and Theophilus London.

As a major cultural influencer and role model for this generation of creative people, Virgil Abloh has used his platform to encourage others to recognize new possibilities and continue pushing culture forward. In a recent feature in I-D Magazine, Abloh pushed people to take action, saying, “If you really want to do what you say you do, leave this conversation and do it.” This attitude is what helped Abloh create his own success story and ultimately change the future of American streetwear.