Yesterday, I had the opportunity to attend the Social Good Summit in NYC. Held annually during the United Nations Generable Assembly week, the Summit unites a community of global citizens and progressive thought leaders around a common theme: #2030NOW. It explored the world we want to live in by 2030 by focusing on how we can unlock technology’s potential to make the world a better place. I wanted to share everything I learned at the Summit, so I decided to summarize some of the panels that I attended below:

The summit kicked off with words from Prime Minister Jacinda Ardern. She spoke about the steps she’s taking in New Zealand to provide mothers with proper child care services and parental leave. As the world’s second elected head of government to give birth while in office, she is very passionate about these issues. She spoke about putting children and framing problems in the eyes of children. We must change what success means. Rather than measuring a country’s success solely through economic measures, we must look at economic, cultural, social, and environmental standards. When she asked children what they wanted in society, they looked beyond themselves, speaking about ending poverty and spending more time with family. She ultimately wants to make New Zealand the best place to be child. 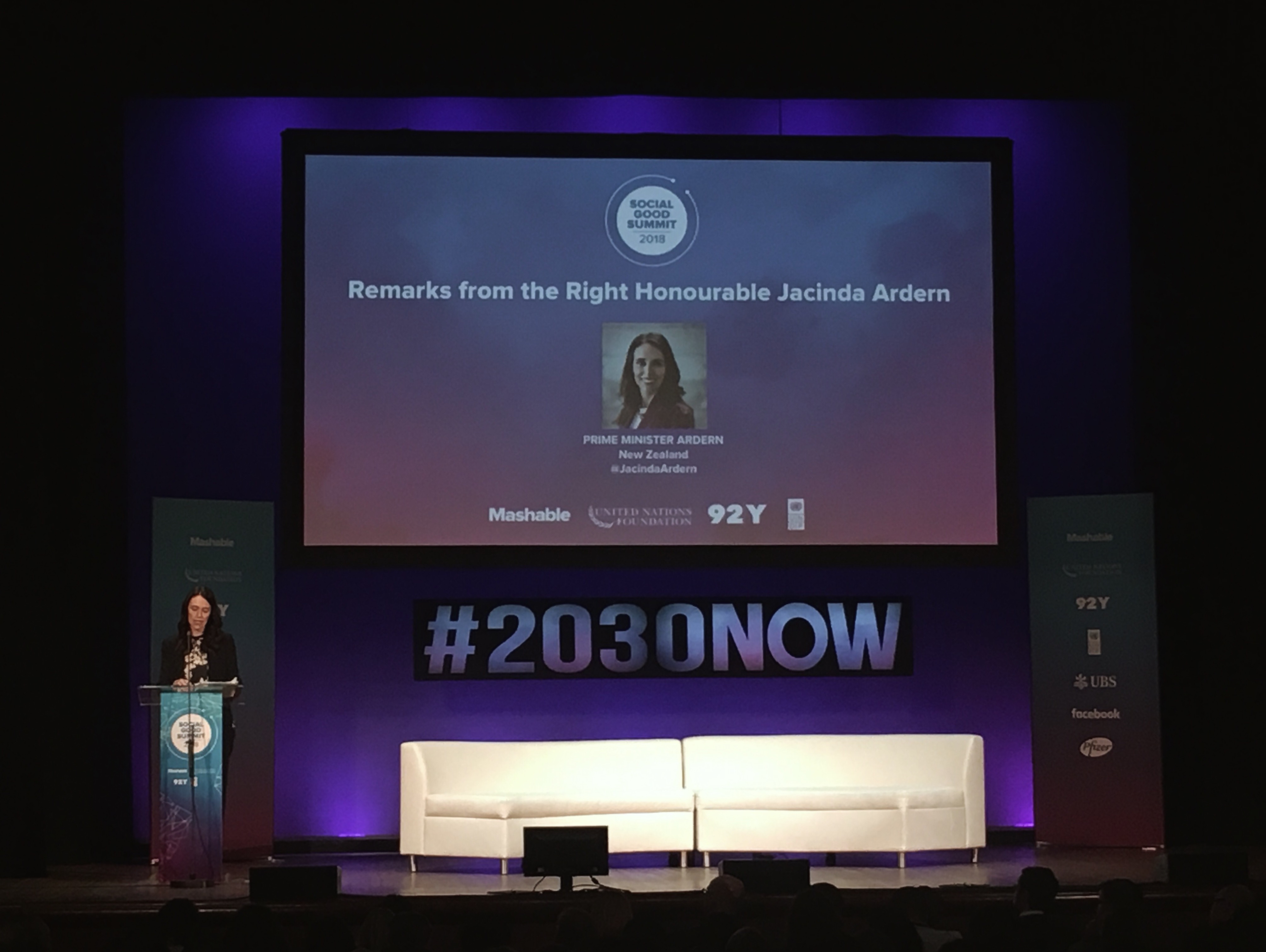 The opening words were followed by a panel discussion about mothers in the workplace. The panel discussed how we must change the culture into one that accepts that mothers and children are a part of the workplace. We must redesign the workplace of the future with paid parental leave, affordable healthcare, child care subsidies, and more freedom around breast feeding. Henrietta Fore, Executive Director of UNICEF, believes that society must make four shifts: from maternal to parental leave, from changes in infrastructure to an investment in people, from individual responsibility to shared responsibility, and from reducing parental stress to improving family well-being. By taking politics out of these discussions, we will be able to open our minds to the best possible solutions. Children are our future and we must give them the best early child care possible. 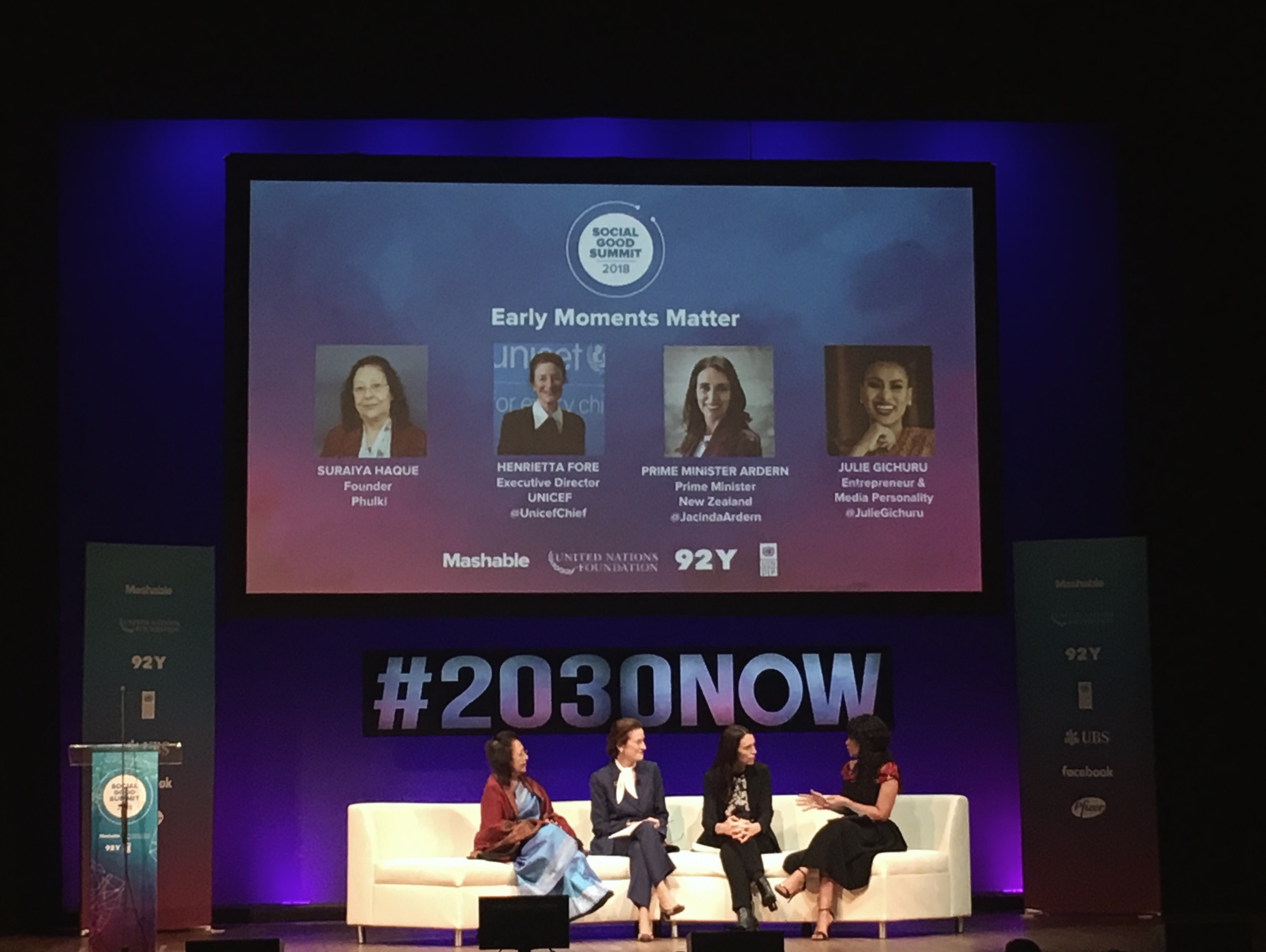 Amplifying Our Voices: How Women are Leading the Call to Leave No One Behind

In the next panel, Padma Lakshmi and Ingrid Silva discussed their journeys to becoming women’s rights advocates. When discussing the rights of minorities and immigrants, Padma made an excellent point when she said that everything that is “other” seems foreign and threatening. We may be different, but we deserve the same opportunities for success. We should all have access to the same opportunities, resources, etc. We are all connected. Even if the problem is not in your backyard, it will be in your water, or your air, or your laws. By helping others we are ultimately helping ourselves. 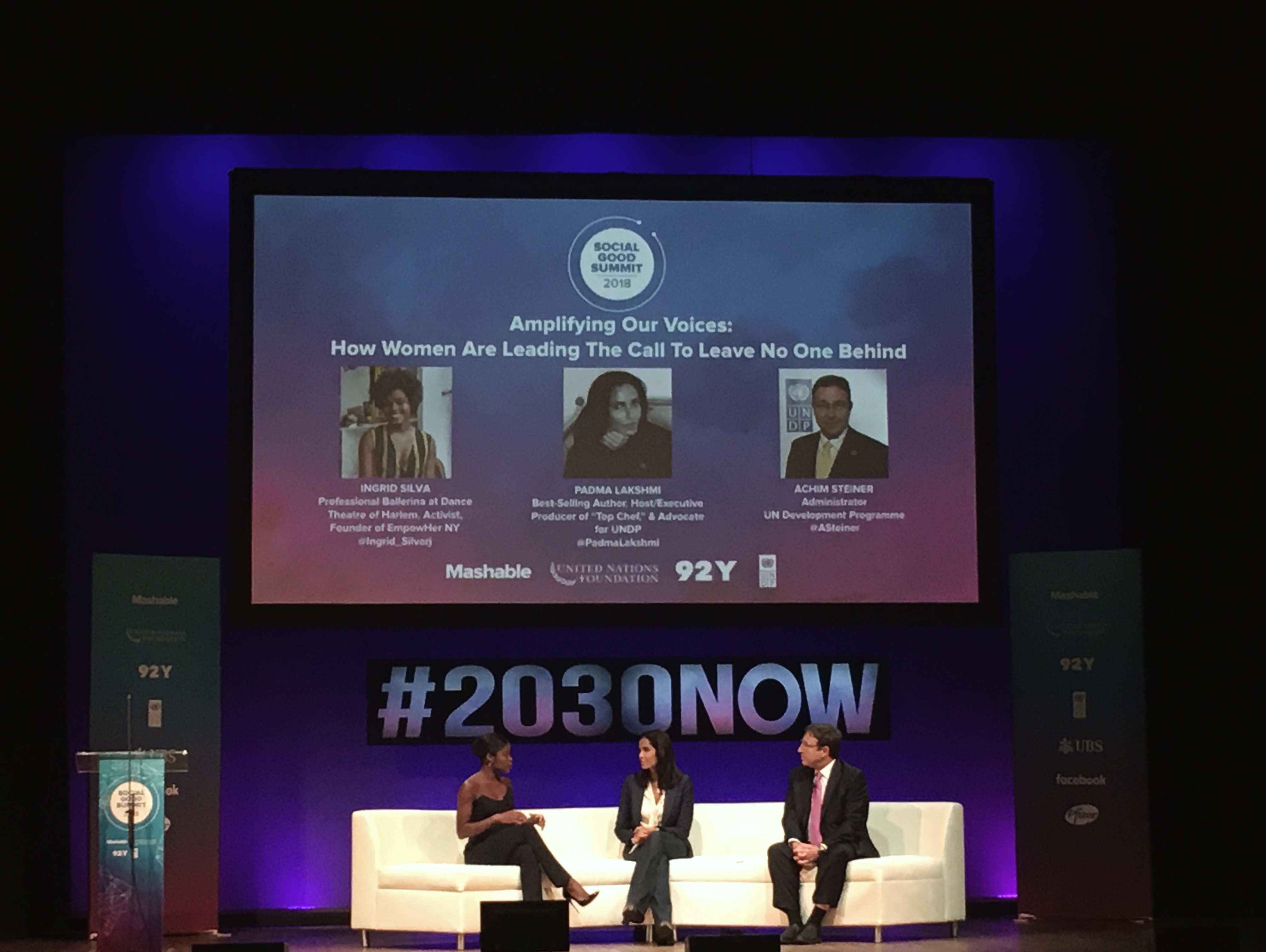 I enjoyed this talk because it related heavily to my career and discussed women in STEM, or rather, the lack thereof. Ignited by a mission to give young women the tools and confidence to make an impact, Greg Attwells founded Creatable, a STEM education experience for girls that allows them to express their passion for creativity through technology. Women solve problems differently than men, making it extremely important for them to be equally represented in the STEM disciplines. More women mean more possibilities. I particularly connected with the idea that they teach creativity first, with technology in pursuit. In other words, their focus is on creativity. They use technology as a tool to express that creativity. In a world of automation, the future is creative. By teaching technology in the context of creativity and compassion, we can solve real problems with empathy – something that is needed now more than ever. 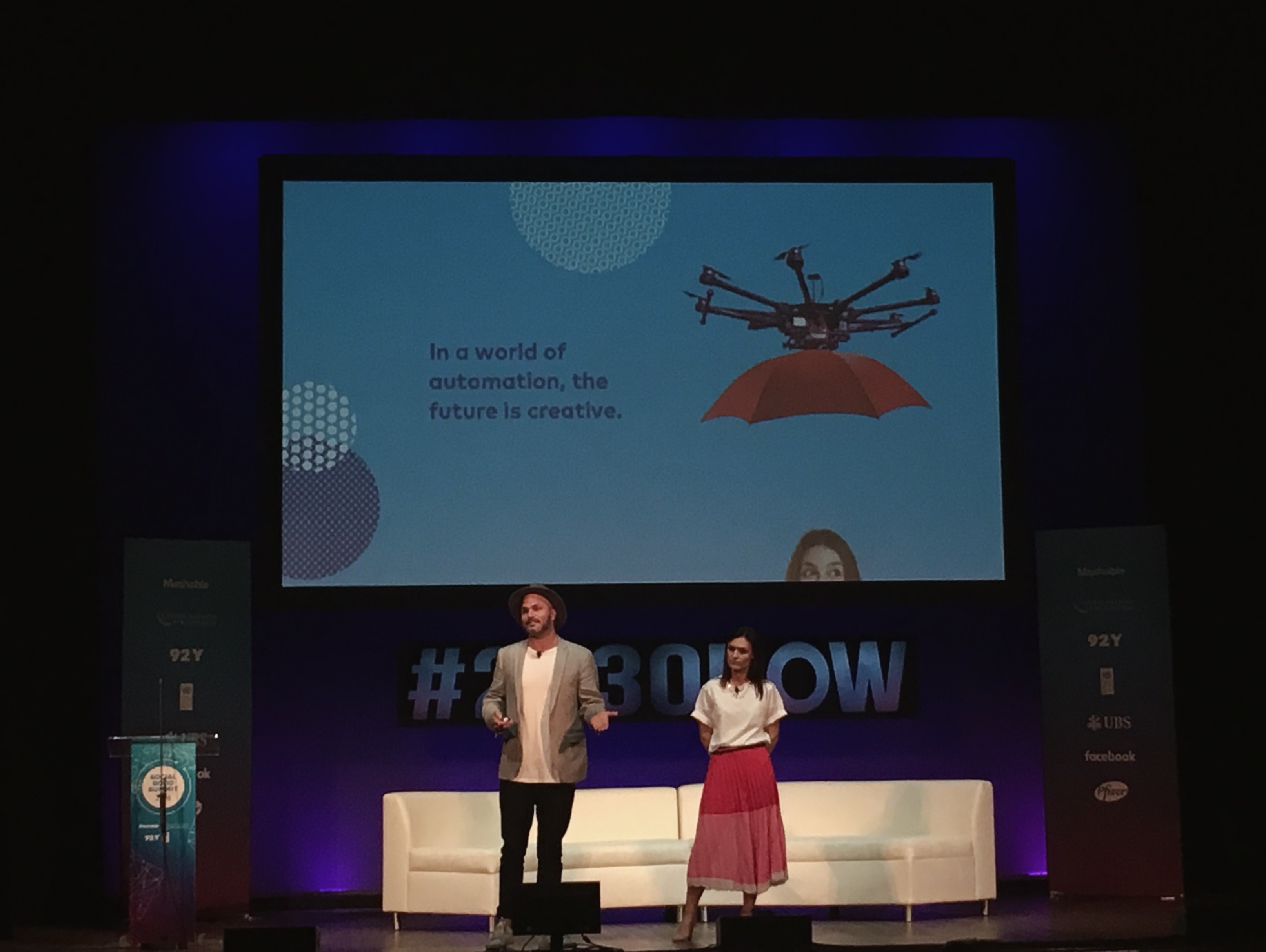 Youth Is Never Wasted on the Young

This panel contained Lilly Singh (aka IISuperwomanII), who you may recognize from YouTube as she has 14 million subscribers. Fittingly, she discussed how to connect with youth in the digital age and solve problems creatively along with Jayathma Wickramanayake, the Secretary-General’s Envoy on Youth at the UN. They both brought up similar ideas that no decision should be made about kids without kids. Young people need to have a seat at the table because if we are going to see sustainable development, this is the generation that’s going to do it. This generation has the ability to change things in a way that people have never previously thought about. 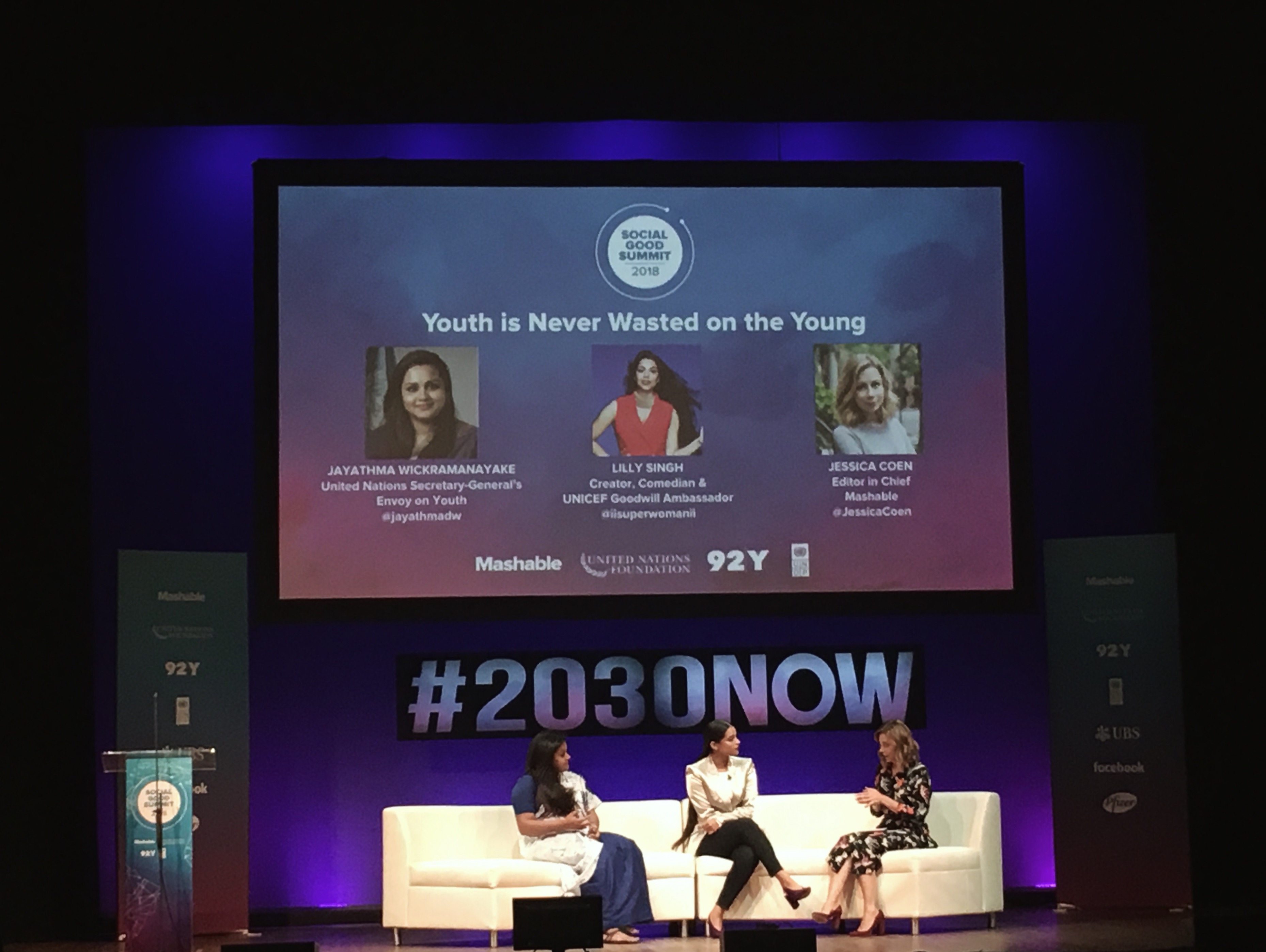 The Lion’s Share is an initiative launched by the United Nation’s Development Programme (UNDP) aimed at transforming the lives of animals across the world by asking advertisers to contribute 0.5 percent of their media spend to conservation and animal welfare projects. The panel discussed the role that marketing can play in ecosystem conservation and biodiversity. 2030 will be determined by decisions that we make today. Therefore, we must take sustainability seriously. Your company’s supply chain and profits rely on it because consumers are now voting by buying based on their values. 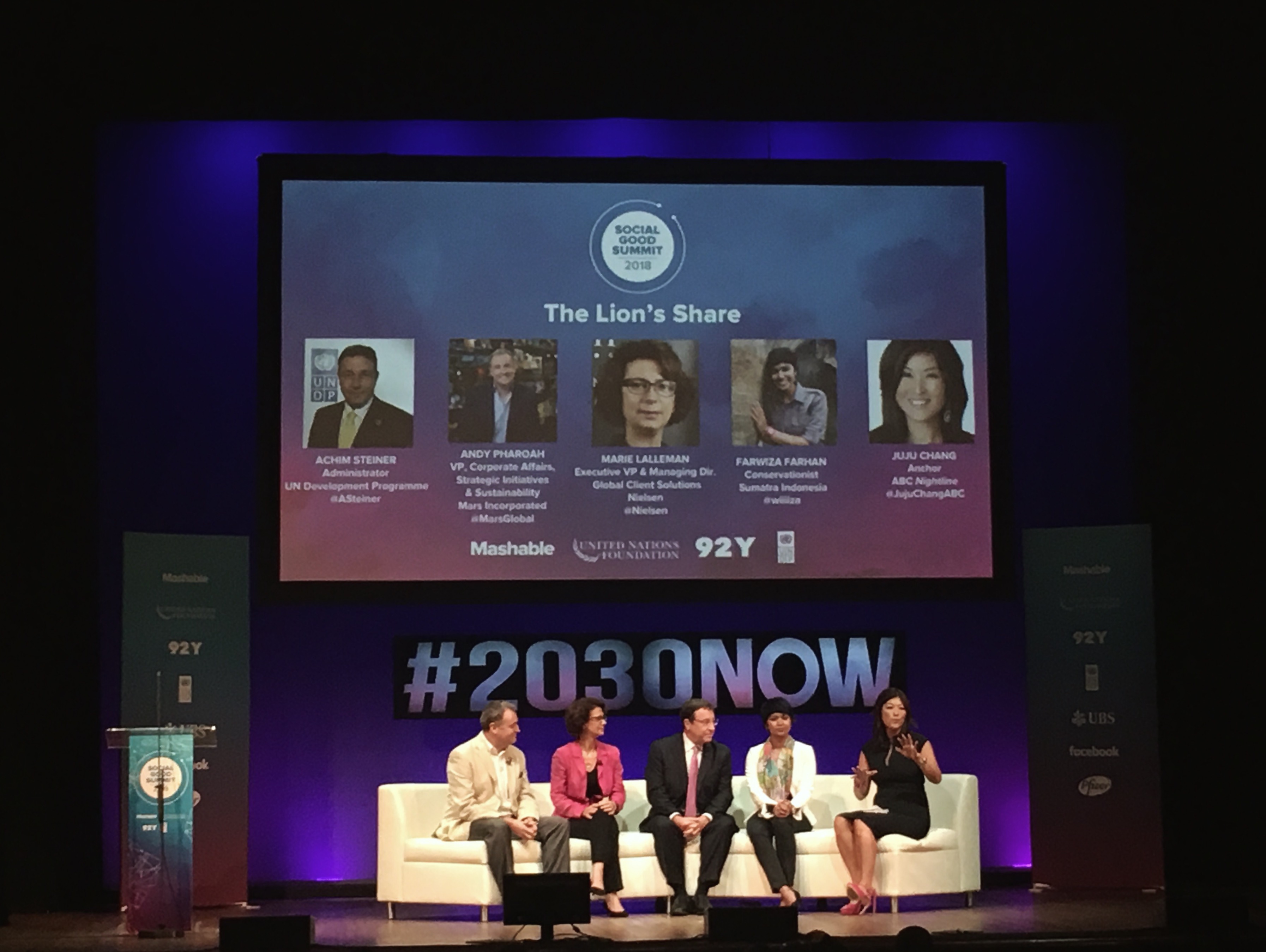 The Untold Story of Girls & Mobile: The Digital Revolution & Who’s Being Left Behind

Zuriel Oduwole is kind of a badass if you ask me. She’s a 16-year-old filmmaker and girls education advocate showing girls around the world what mobile technology can do. Girls are being left behind when it comes to mobile. Many girls in less developed countries are not allowed to use phones, and if they are, their use is heavily limited and monitored. We must give these girls the same access to valuable information as boys in order to even the playing field. 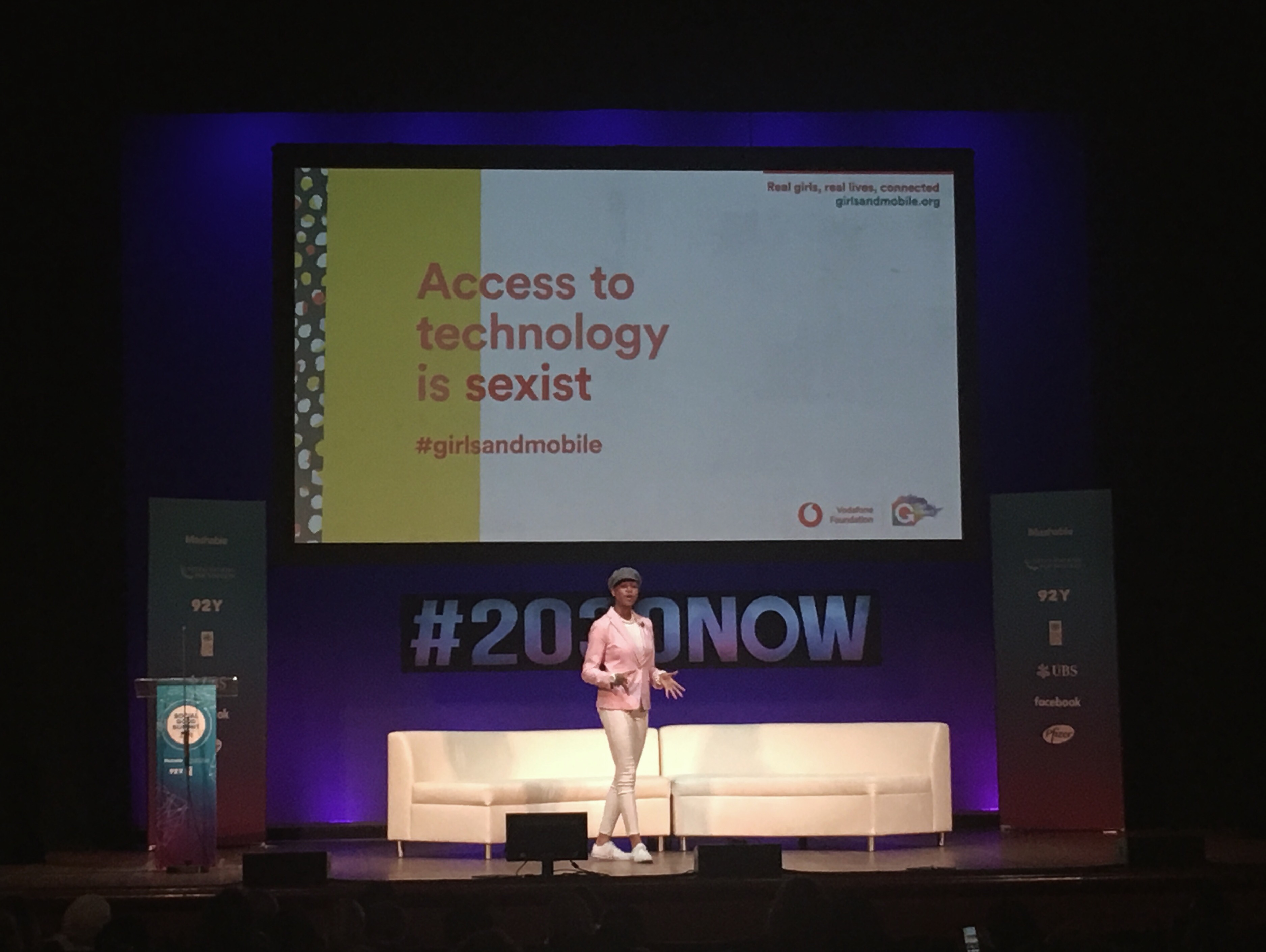 The Power of Blockchain for Social Change and Empowerment

This panel was interesting because I’ve recently been in the ways blockchain technology can eliminate problems in the fashion supply chain. Each member of the panel spoke about how blockchain technology has helped them create social change. Ben Siegel, Global Social Impact  Project & Partnership Lead at ConsenSys Social Impact, discussed how he has been bridging the gap between technologists and humanitarians. Rosa Mahboob is focused on building digital literacy for women and children in developing countries. She uses cryptocurrency because many women in developing countries don’t have access to banks and physical money is often stolen before women can deposit it or use it. 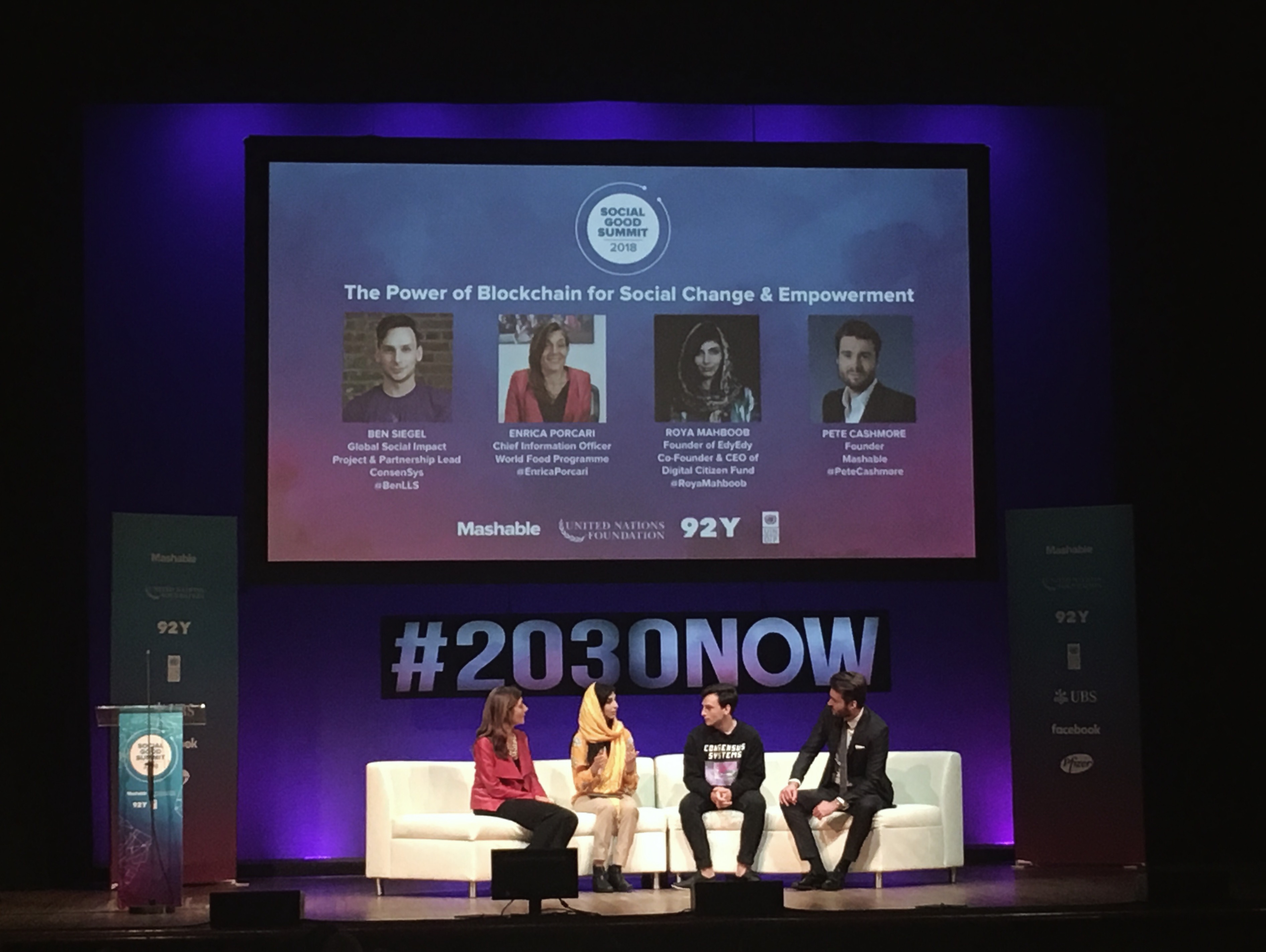 Hope for a Healthy Planet

This panel spoke about environmental sustainability with a focus on reducing plastic waste. The moderator, Miranda Wang, has developed an economical recycling solution for currently unrecyclable plastic waste. BioCollection uses a chemical process that transforms plastics into renewable chemicals for sustainable virgin-quality materials. Erik Solheim, Executive Director of UN Environment, answered the question “Can I change the world?” with “Who else?” and Dia Mirza encourage everyone to use their unique skills to make a difference. 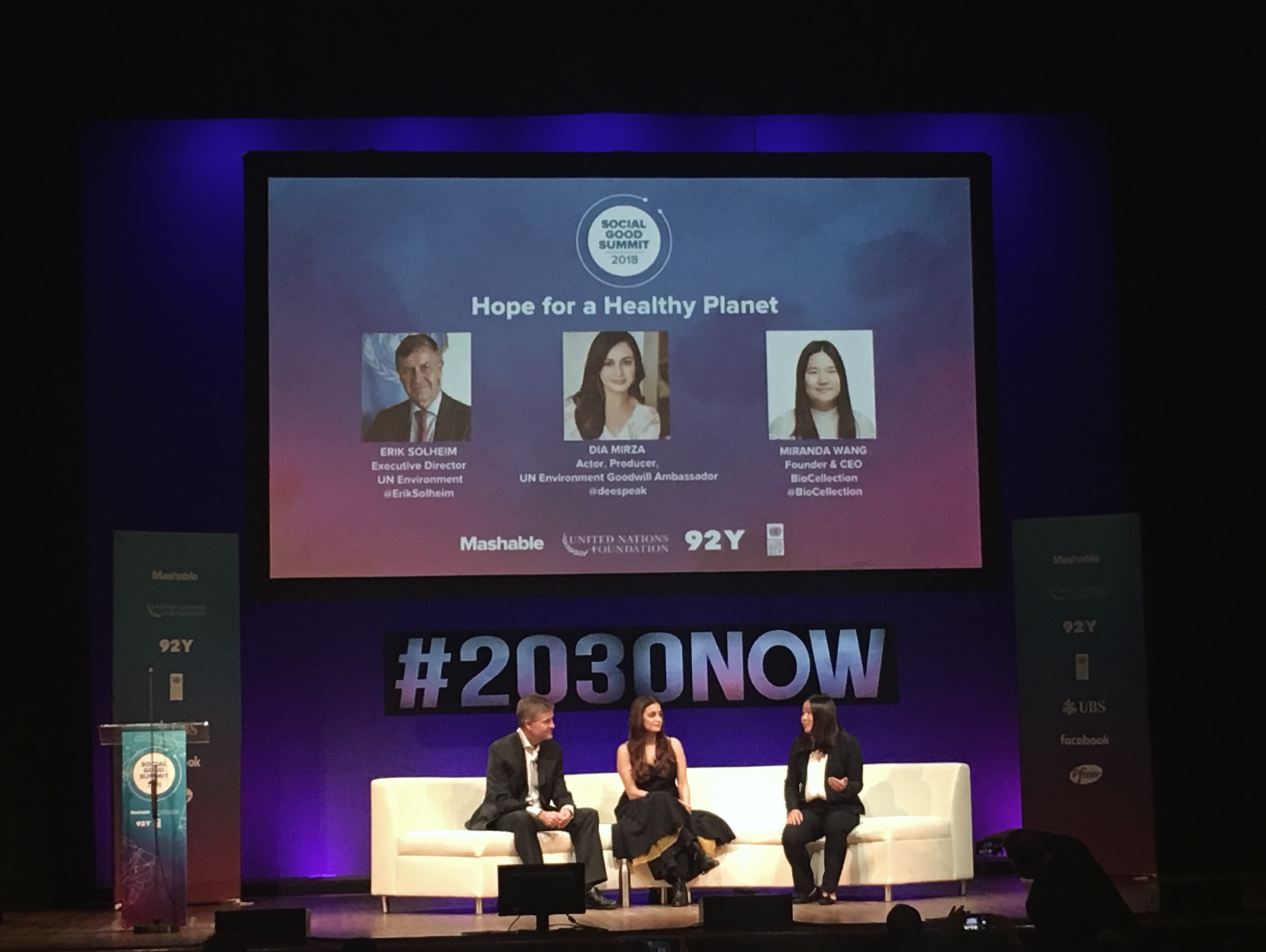 Time Is Up for Gender-Based Violence

Fatima Goss Graves, Monica Ramirez, and Joanne Smith discussed the very pertinent Times Up and Me Too movements. They discussed the importance of maintaining the current momentum of these movements and approaching these issues with intersectionality. They also highlighted the leadership of survivors in these movements. 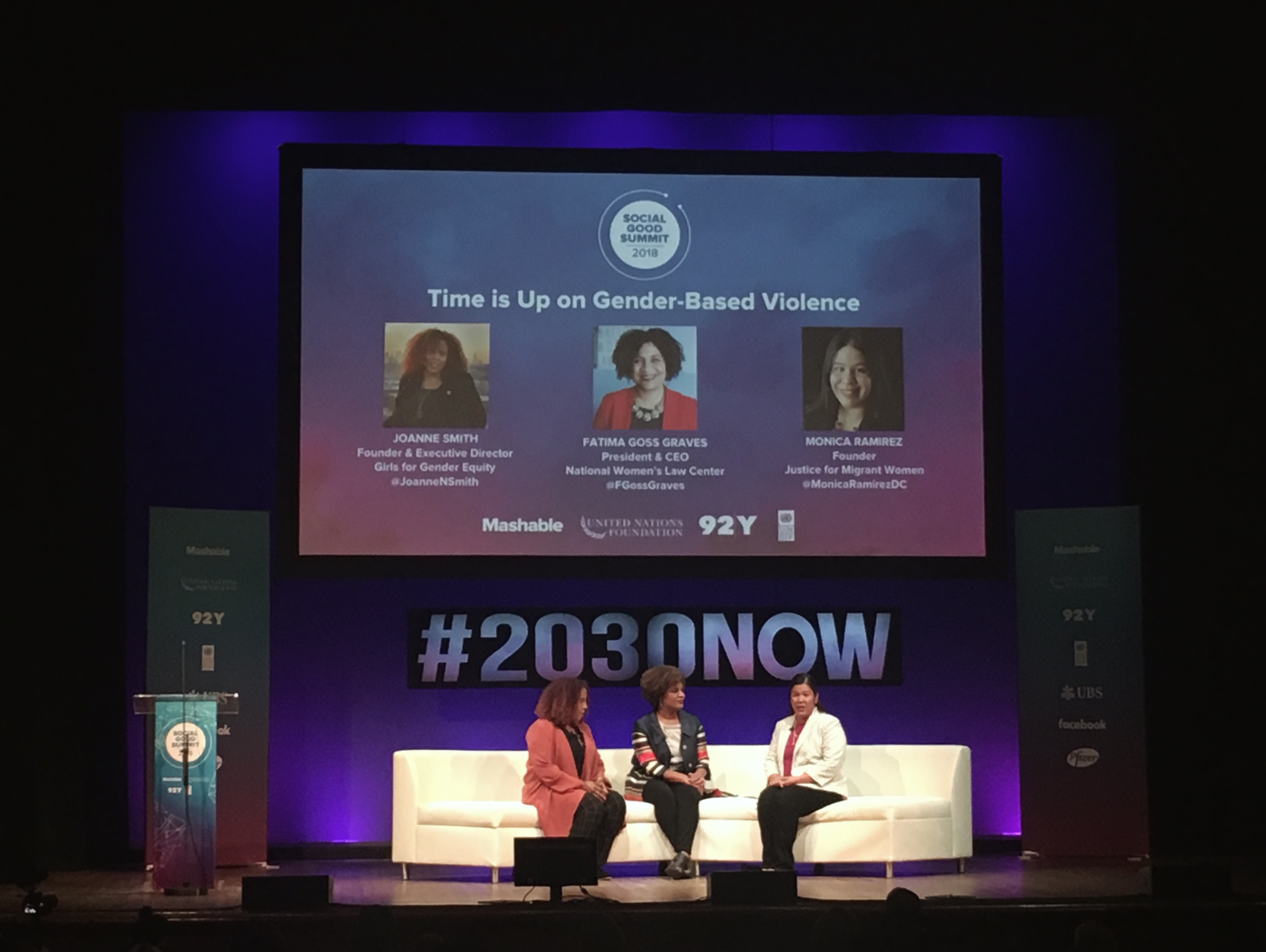 A Chef’s Manifesto to Fight Hunger

Chefs Anahita Dhondy, Manal Al Alem, and Arthur Potts Dawson discussed the importance of growing ingredients with respect for the earth and its oceans. The SDG2 Advocacy Hub coordinates global campaigning and advocacy to achieve the Sustainable Development Goal (SDG) 2: To end hunger, achieve food security and improved nutrition, and promote sustainable agriculture by 2030. The SDG2 Advocacy Hub has established a community of 130+ chefs from 38 countries who worked together to create The Chef’s Manifesto. The Chef’s Manifesto is a document written by chefs, for chefs, synthesizing the SDGs into 8 thematic areas that chefs are most interested in tackling (Prioritize the most vulnerable, End malnutrition, Productivity, Sustainability, Diversity, Innovation, Trade Systems, Markets). 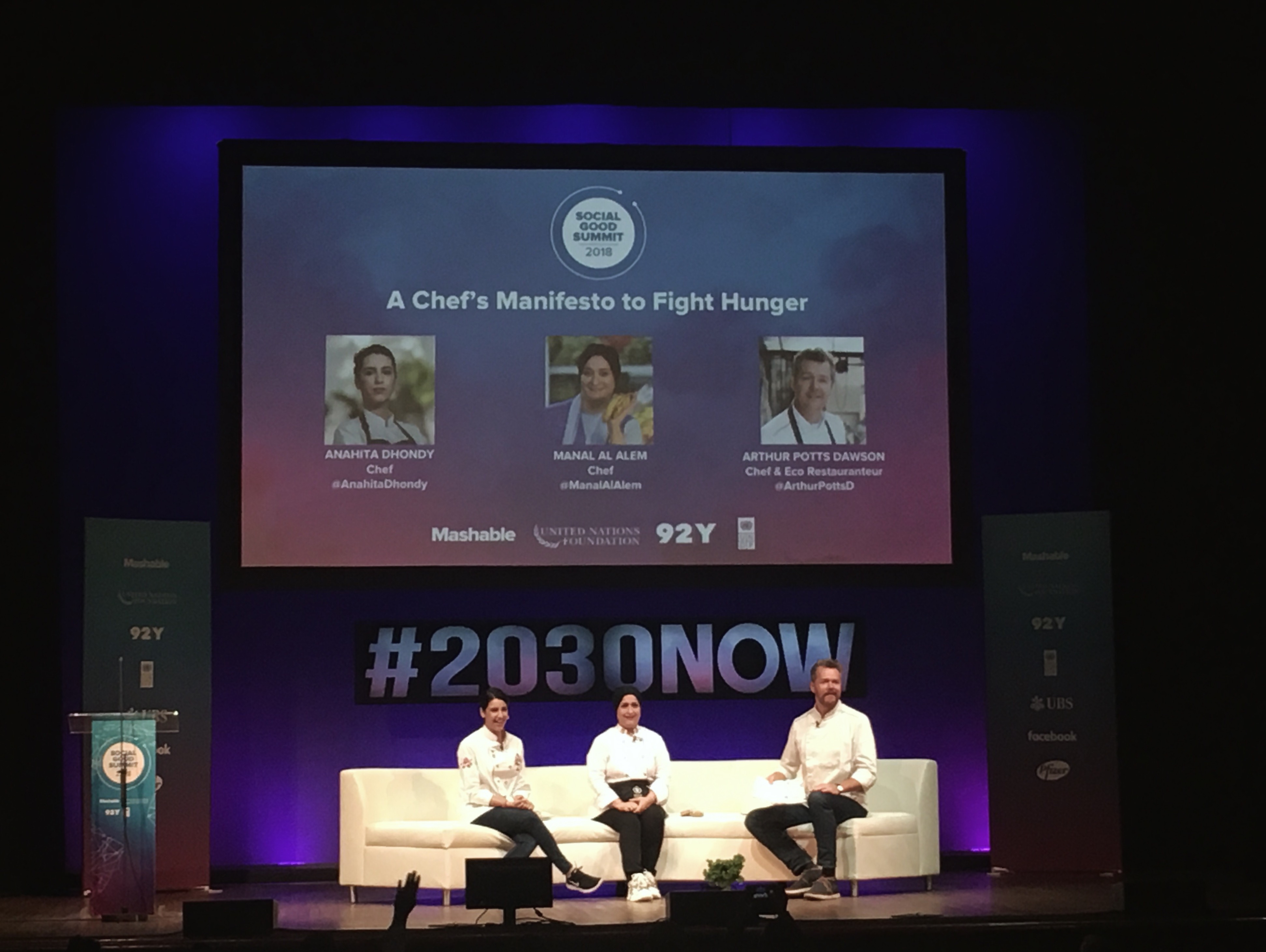 In Defense of Human Rights

This was one of the talks I was most looking forward to. I am familiar with Amber Heard’s humanitarian work and view her as a role model. I pretty much look up to any woman who can create a place for herself in both fashion/Hollywood and social impact/advocacy/STEM. Heard spoke about the different human rights initiatives that she is involved with. She reminded us that we are all human and we are all connected. If anyone’s human rights are denied, everyone’s human rights are denied. She also encouraged people to take action by reminding us of the benefits of modern technology: “We have never been more powerful than we are now… In your hands is the power to change the world.” 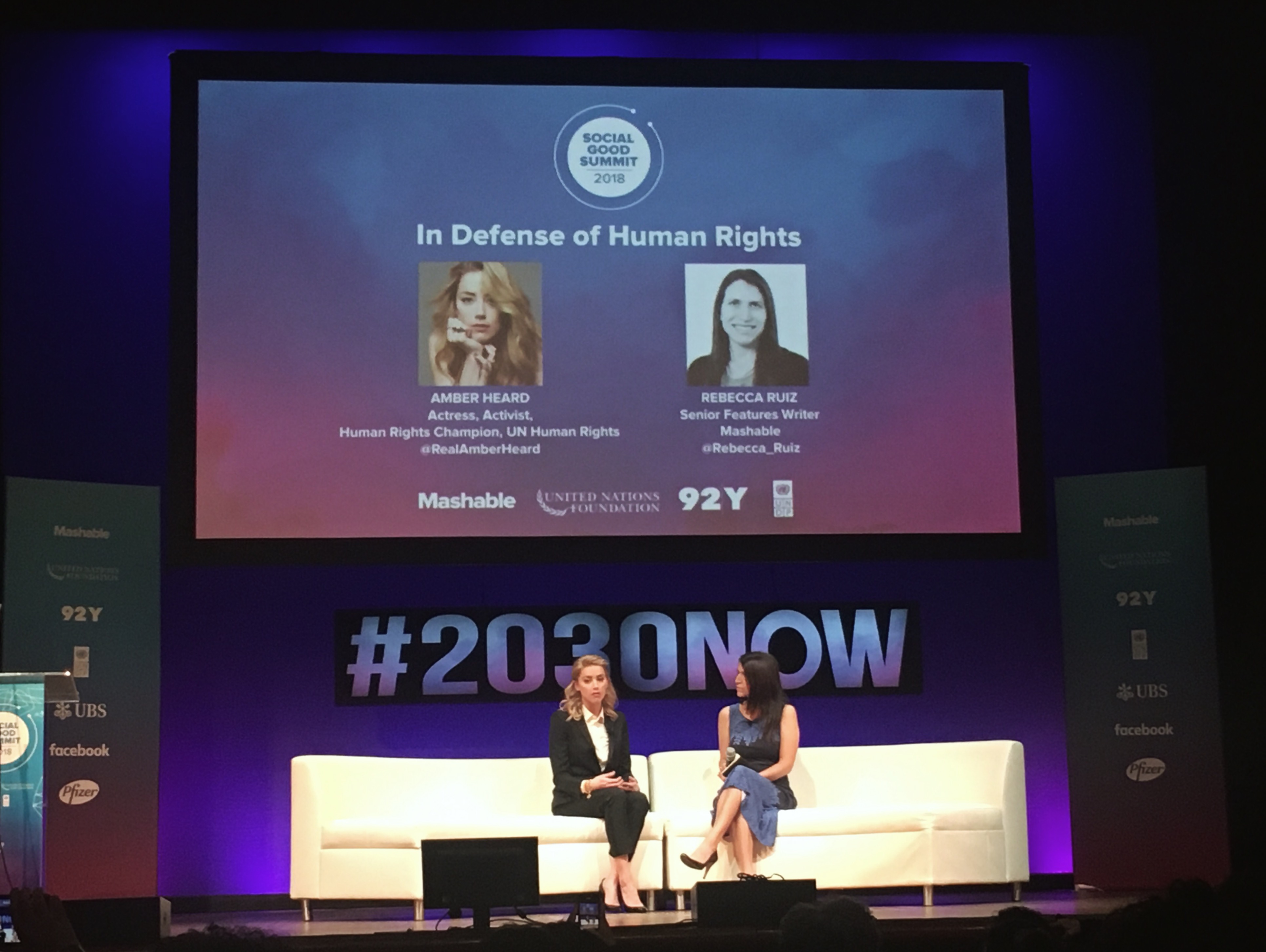 Uzo Aduba, an actress known for her role as “Crazy Eyes” on Orange is the New Black, spoke about her connection with Hiefer International. She spoke about how one person can make a difference and how one choice has the potential to change lives. Heifer International can have a generational effect on a community by giving someone the skills and trades they need to better themselves. 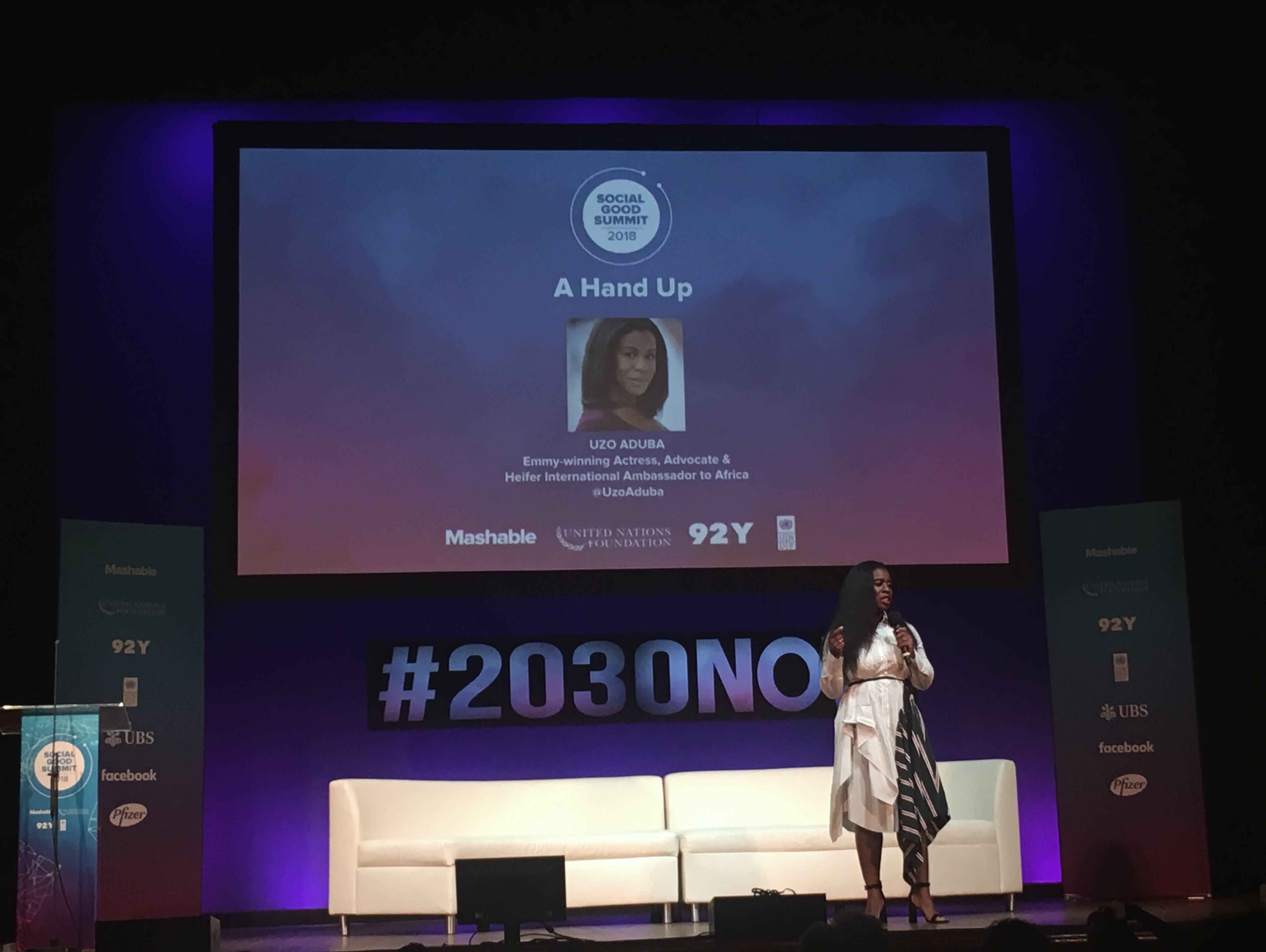 Elisha London and Sitawa Wafula spoke about the importance of mental health because it is an issue that affects everyone everywhere. Everyone, regardless of where they are, should be able to get the information and support they need on their mental health journey. Sitawa Wafula has set up a blog, help line, and academy to link people in Africa with mental health support. United for Global Mental Health launched this week and wants to see a world where everyone, everywhere, has someone to turn to in support of their mental health. They encourage you to use #imind and #theworldneeds to show that you care about mental health and demand action. 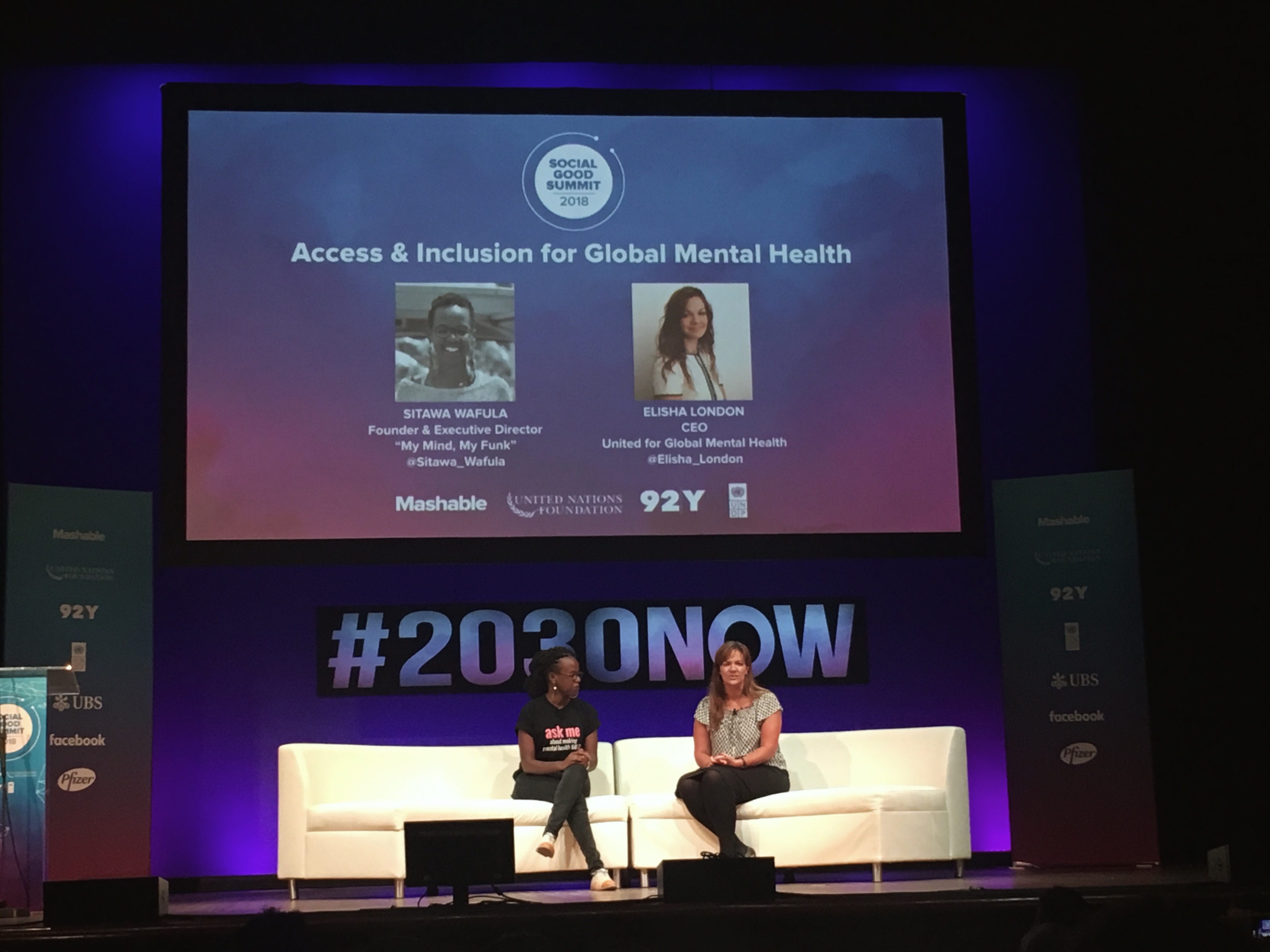 Not Your Grandparent’s Sex Ed

The panel discussed the value of making sex-ed more approachable and accessible. They discussed the importance of meeting youth where they are with accurate and non-judgmental answers to their questions, highlighting the benefits of YouTube and shows like Netflix’s Big Mouth. They discussed how educating people about sex and relationships is fundamentally about human connection. People just want to feel seen and validated. 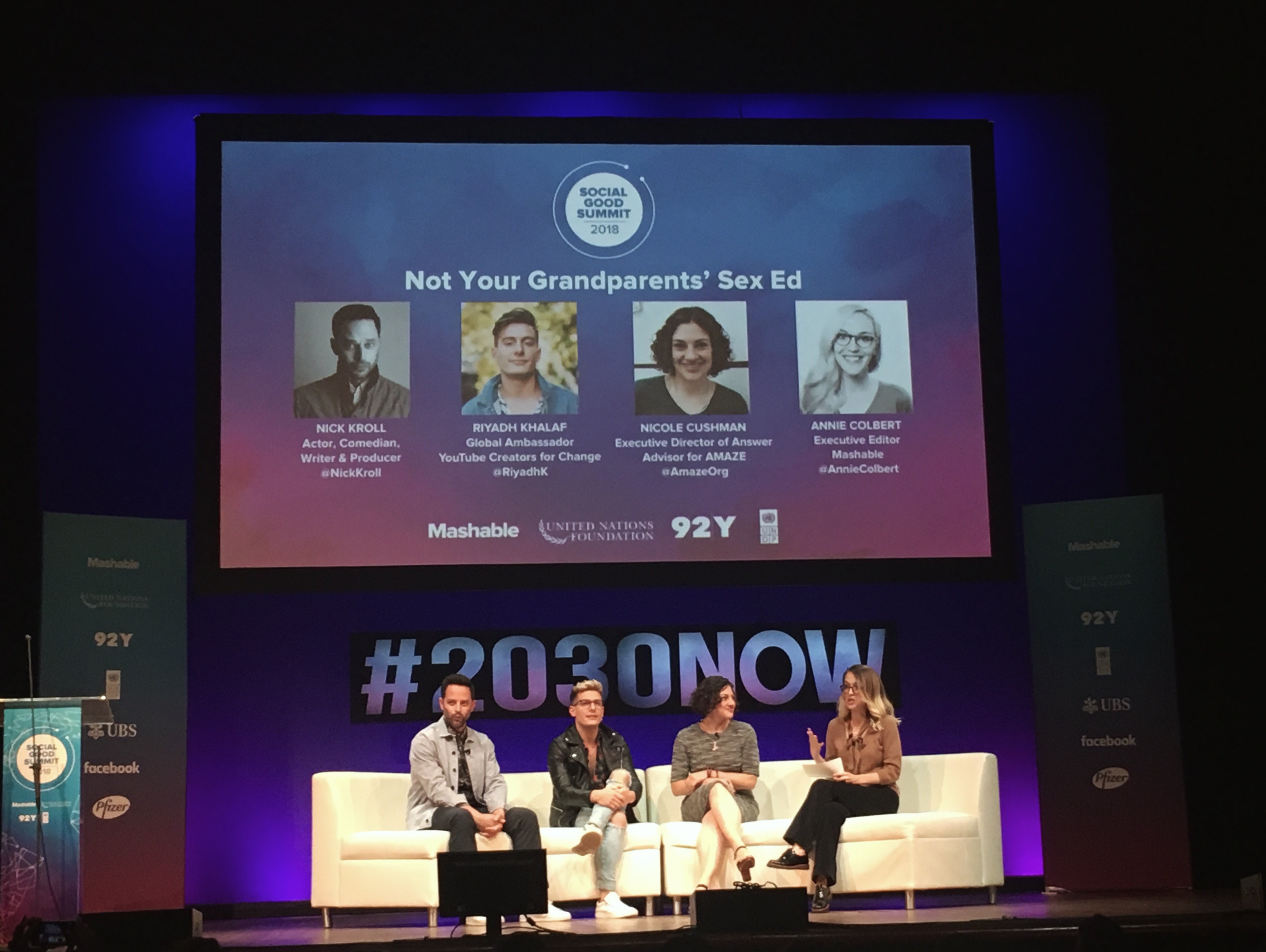 Nothing About Us Without Us

Nyle DiMarco, winner of America’s Next Top Model Cycle 22 and deaf activist, highlighted the importance of representation for the deaf and disabled communities. He recounted his own journey through the education system and focused on the fact that everybody has the right to language and education. Yesterday also happened to be the first World Sign Language Day, so he explained the intricacies of sign language and showed the audience how to sign “Social Good Summit #2030NOW.” 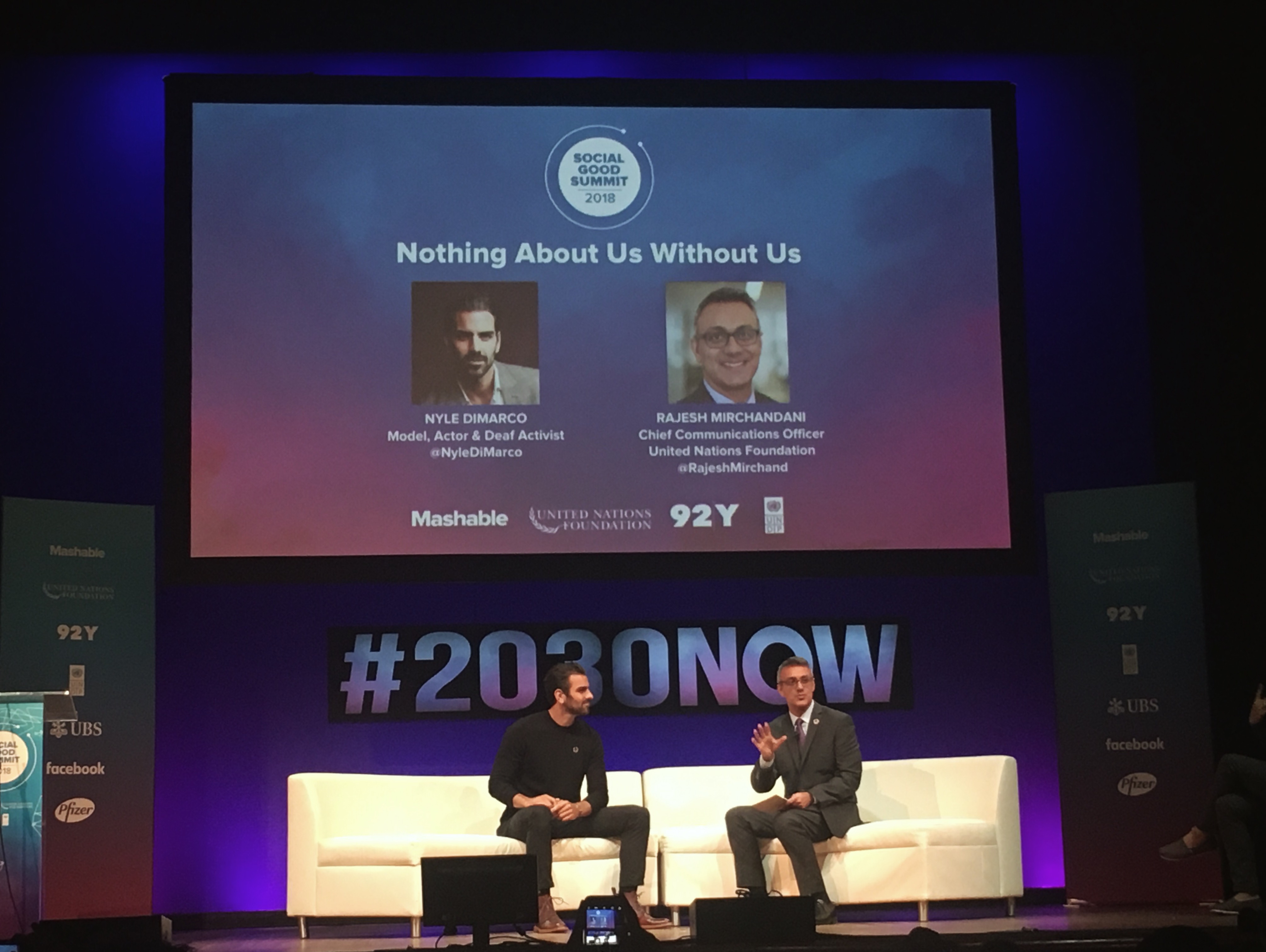 Overall, the event was really inspiring and hopeful. Despite the struggles we are currently going through as a nation and the massive amount of work that needs to be done, there are so many people using their unique skill sets to make the world a better place. We all have the ability to make an impact and create the world we want to live in by 2030.